When we design a city, we create a way of life, says former mayor of Bogotá

The way we make our cities will be critical in the next 50 years as the world’s urban population looks set to double, said former Bogotá, Colombia mayor Enrique Peñalosa.

Peñalosa, a Duke alum (Trinity ’77), was invited during International Education Week by Duke University Development and the Duke University Hispanic/Latino Alumni Association to speak for its “Conversations with Leaders” series and for the Latin American Student Organization’s (LASO) Latinx Speaker Series, both with co-sponsorship from the Duke Center for Latin American and Caribbean Studies (CLACS). The virtual events were by moderated by Patrick Duddy, director of CLACS, and Faiz Sikaffy, co-president of LASO, respectively. 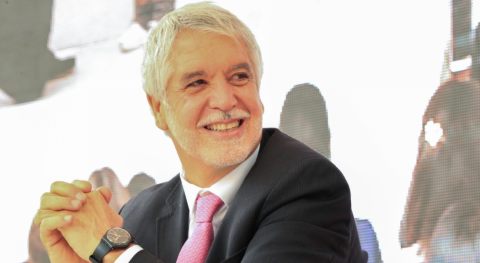 Peñalosa, mayor of Bogotá from 1998-2001 and again from 2016-2019, oversaw the construction of the TransMilenio bus system, which has since become a model for other cities. He facilitated the most expansive bikeway network outside of China and Northern Europe, built housing projects for half a million people, and built nearly 100 new schools in the poorest areas of Bogotá.

In his talks at Duke he presented breathtaking near-term projections of future urban growth. For example, “Over the next 50 years, the U.S. will build more homes than today exist in the United Kingdom, France, and Canada together,” Peñalosa said. “The way we make our cities will determine almost more than anything human well-being for centuries to come. How do we want them to be?”

Cities are necessary for future development, he said, because they promote creativity, productivity, sustainability, and equality. Yet significant urban planning problems persist in the Americas and worldwide.

Currently, more than one billion people live in urban slums, and the number grows by millions every week, said Peñalosa, saying there needs to be much more government control of land in developing cities to design public spaces for the future.

Peñalosa said the current model of American cities where people move farther and farther from the city center creating suburbs and exurbs is not sustainable. Traffic will only get worse in American suburbs because the farther the distance one car has to go, the more traffic is created, he said.

He gave the example of Silicon Valley; the farther it sprawls, the more horrible the traffic. In contrast the TransMilenio bus system moves more people in one hour than most subways in the world and costs 10 to 15 times less.

“It is possible to solve mass transit problems,” Peñalosa said. “It is a political decision, but if we have democracy and all citizens are equal before the law, surely a bus with 200 passengers has the right to more road space than a car with one. These kinds of projects are within the reach of any city with the political and managerial capacity to do it.”

Peñalosa said he favored buses over subway transit systems because they are cheaper and more accessible to the elderly and disabled. Also, wealthier people tend to see an underground system as a place for the lower classes.

The former mayor is also a strong advocate of bicycle transportation. Bogotá has more than 100 km of bicycle lanes and trails; nearly ten percent of residents go to work by bicycle. This is important for health, for the environment and even for equality, because on bicycles people meet as equals, he said.

Peñalosa suggested U.S. suburbs might be redeveloped with several-story buildings, sidewalks, greenways, and bicycle paths. If American cities keep growing the way they are, he said, inequality will increase because poor people will have to live farther and farther away from the city centers where they work.

“It is possible to create a city model which is neither the low-density suburbs with gardens, nor the dense Manhattan with little green,” he said. 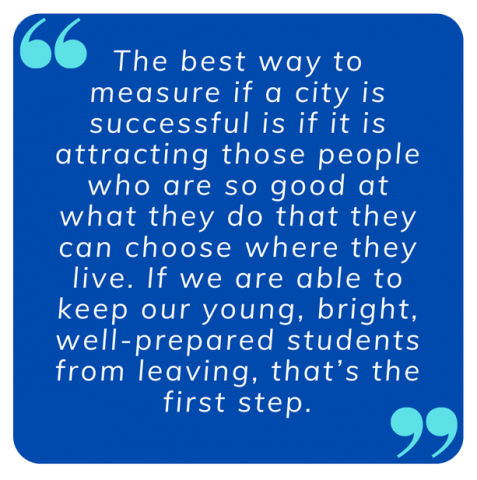 Peñalosa said he believes in private property and the market economy, but he also believes government must intervene to create equity in growth and to make decisions on how to grow cities in the right places and the right way because there is a finite amount of land.

When Duddy asked what metric we should use to judge a quality of life in a city, Peñalosa said, “Happiness is very difficult to define, it is impossible to measure, yet it is the only thing that matters.” A good city is one that is good for walking, good for children, the elderly, and the disabled, he said. “We need to walk just as birds need to fly. We need to see people and need contact with nature and water.”

A city is successful if it is attracting the best and most creative people, he said.

“The competition for the future is not competing for capital, but competing for people – how to attract and retain the best people, and the best way to measure if a city is successful is if it is attracting those people who are so good at what they do that they can choose where they live. If we are able to keep our young, bright, well-prepared students from leaving, that’s the first step.”
–  by staff writer Jennifer Prather

This event is available to watch online