Five years after the historic peace agreement with the Revolutionary Armed Forces of Colombia (FARC) the U.S. State Department has finally removed the guerilla group from its list of terrorist organizations, but peace in Colombia is not guaranteed, according to research by two Duke PhD students.

“What Comes Next in Colombia’s Peace Process?” was the question asked by political science PhD candidates Gabriella Levy and Mateo Villamizar-Chaparro at Wednesdays at the Center on Wednesday, March 23 as part of the series Colombia: 5 Years of Peace? 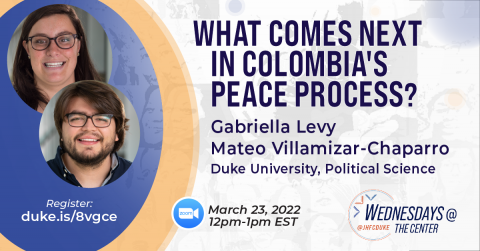 The conversation with CLACS special events coordinator Miguel Rojas-Sotelo was sponsored by the John Hope Franklin Center and the Center for Latin American and Caribbean Studies at Duke.

Levy and Villamizar-Chaparro said that while the leftist candidate Sen. Gustavo Petro won a majority in the recent primaries, Colombia is still a divided country and recent massacres of Indigenous leaders, former combatants, and human rights defenders were a serious threat to security.

On the plus side, the vast majority of FARC fighters turned in their weapons and have not returned to the fighting. Levels of violence have declined since the peak of the conflict in the early 2000s.

Also, more than 13,000 victims and perpetrators have gone through the Comprehensive System for Truth, Justice, Reparation, and Non-Repetition, Villamizar-Chaparro said.

“This has been super important for both Colombians at every level of economic scale in the sense that it has brought to our attention people that were both victims of the conflict, victimizers, or something in between,” he said.

However, there is public disagreement in more conservative areas of the country with the level of punishment for perpetrators and the compensation given to victims, which has led to certain provisions of the peace accord lagging or not being fulfilled, Villamizar-Chaparro said. Ex-FARC fighters still have trouble reintegrating into society because they are being retaliated against and unable to find work.

There has also been a delay in the rollout of assistance for coca farmers, and the substitution crops have not been as profitable, so the result has been an increase in the amount of coca produced in the last five years. Budget cuts by the administration mean land restitution projects will likely take 50 years based on the current rate of distribution.

“These two things, both the delays and rising insecurity have led the Colombian Constitutional Court to demand the government comply with the peace process and guarantee the safety for ex-combantants,” Villamizar-Chaparro said.

Levy highlighted the recent elections between the leftist and centrist candidates who have pledged to uphold the peace accord, and a candidate on the right who has criticized the agreement in the past and would likely follow the current Duque administration of budget cuts and delaying implementation of key provisions.

Another concern was that the FARC party, Comunes, did not win any more seats than the ones they were given in the accords, and that people seemed to be reluctant to vote for them due to historical reprisals.

“I think it’s entirely possible that people are really scared to vote for Comunes given that back in the ‘80s and ‘90s, the FARC had another political party, the UP, and all of its politicians were systematically assassinated, as well as the people who voted for the party there, in the areas in which they living, were targeted, as has been pretty extensively documented,” Levy said.

Levy was also concerned that the peace accords themselves have not been much of an issue in current political campaigns.

“What I would want is not necessarily for the peace accords to change, I just want them to be implemented. It’s illuminating to see how few of them have actually been implemented,” she said. “I think if we continue the way that we’re going I can easily see a situation where the demobilized FARC gives up and re-arms. And if the government continues not to protect ex-combatants, I think that would lead to a complete dissolution.”

Levy and Villamizar-Chaparro said their research shows that voters may not punish a far-right government for the ongoing violence or the slow implementation of the peace agreement, and in many cases are willing to vote for candidates directly tied to wartime civilian victimization.

They would like to see greater U.S. support for rural development and demobilized fighters and less for security and narcotics control.

A video is available for this event