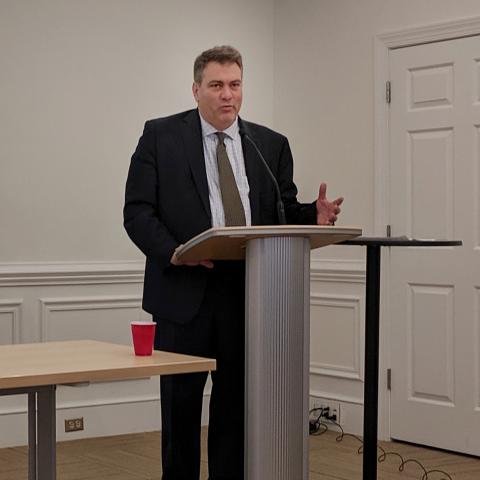 Andrew Stein, analyst at the U.S. Department of State, Bureau of Intelligence and Research

PhD graduates at American universities tend to significantly outnumber available academic jobs, according to a guest speaker from the U.S. Department of State on November 6.

For example, a recent study showed that 1250 PhD graduates in history went into a job market with only 750 academic job openings, said Andrew Stein, an analyst at the State Department’s Bureau of Intelligence and Research.

Speaking at the weekly Wednesdays at the Center lunch sponsored by the John Hope Franklin Center and the Center for Latin American and Caribbean Studies, he outlined the non-academic job possibilities for social science PhDs in Washington, D.C.

Stein said that with more than 70 percent of academic positions now non-tenured, students need to prepare for multiple options. As the old path for doctoral students has narrowed, the non-academic track may be more appealing.

Stein himself has two master’s degrees, one in Latin American Studies from New York University, and one in political science from the University of Pittsburgh, and a PhD from Pittsburgh where he specialized in religious studies and politics. Prior to applying to the State Department, he taught in a men’s college in a small town where he found the social life limited.

He found that his academic training made him an ideal candidate for data analysis, writing reports, analyzing survey samples, and communicating his findings to policy makers.

“Prepare for multiple options,” Stein said. “Evolve or die. If you don’t continually learn, you become what we in the government call ‘OBE – Overcome By Events.’”

In academia, professors are expected to be experts in their field, but Stein said working for the State Department gave him the opportunity to bring his interdisciplinary training to his job, which covers 20 countries in Latin America, and taught him to be an effective generalist.

There are careers for social science PhDs in the civil service, the diplomatic service, the military service, and think tanks, among others. Stein said he chose his path because it appealed to his sense of patriotism, the idea of service and the excitement of continuous learning.

Over the years, Stein says he has sometimes had to put aside his own personal views of U.S. policies in the region.

“When I took an oath 20 years ago, it wasn’t to the DNC or RNC, it was to the Constitution,” he said. “If you believe in our system, you represent our laws, you represent our institutions. And to some extent you have to check your personal views at the door. If you can’t, you should leave. But I ask myself, do I want to use what I’ve learned to make things better?”

For further information on jobs available in the U.S. goverment, see https://www.usajobs.gov/