Politics of Life, Contributions of the Marginalized Discussed at the Sixth Annual Global Brazil Conference 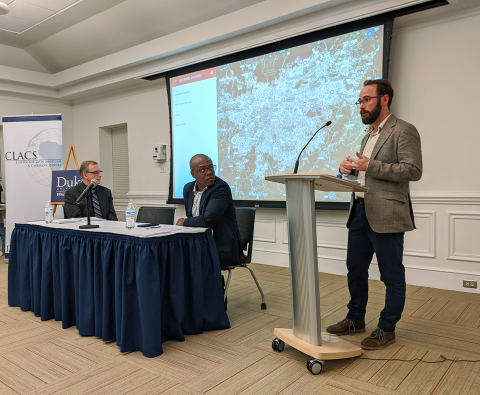 In São Paulo, South America’s most populous city, between 20,000 and 25,000 people practically vanish each year. But what does it mean to disappear? Anthropologist Graham Denyer Willis (University of Cambridge) offered a novel perspective on the act – or rather the art – of disappearance. He informed an audience of 60 gathered at the John Hope Franklin Center that disappearance can not only be the result of intentional violent acts, but can also originate in an individual’s own decision to hide from legal or extralegal authorities. That is, the very act of disappearing could be seen as a form of political expression or strategy.

Willis was the keynote speaker at the sixth annual Global Brazil Conference, held last month at Duke. The anthropologist opened a discussion of the “Arts of Life and Death” in Brazil, the theme of this year’s event. Alongside citizenship and legality, topics included the fine arts, immigration, racism, international activism, and affirmative action.

DBI Co-Director and Professor of History John D. French said this year’s event gave a diverse group of presenters the opportunity to reflect on contemporary and historical challenges facing Brazil. 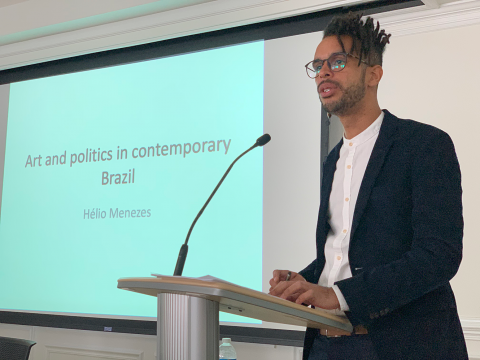 “When it came to selecting the theme for the 2020 conference, we wanted to try something different,” French said. “We asked, ‘What happens if we emphasize the politics of life rather the politics of death?’ Each of our presenters has something important to say about the life-affirming characteristics of activism through the fine arts and historical consciousness-raising.”

The theme of the 2020 conference was inspired by Duke undergraduates enrolled in the Spring 2020 course “Black Lives Matter: Brazil-USA.” Guided by French and Silvio Luiz de Almeida, Mellon Visiting Professor of Latin American and Caribbean Studies, seminar participants chose to focus on what it means for people of color to lead a quality life.

Anthropologist and art scholar Hélio Menezes (Universidade de São Paulo) discussed the contributions of Brazilian artists of African descent. As the curator of numerous critically claimed exhibitions, including “Histórias Afro-Atlânticas” at the São Paulo Museum of Art, Menezes has worked to “decolonize” the art world, which he said focuses disproportionately on the works of white artists. 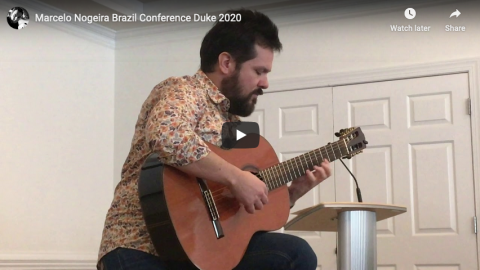 As the Global Brazil Conference opened, the 4th biannual Collegium for African Diaspora Dance conference came to a close. Anthropologist, dancer, choreographer, and curator Luciane Ramos Silva generously agreed to share her work with the Duke Brazil community after three intense days of exchange sponsored by the Duke Dance Program. Silva’s presentation wove together movement and the spoken word and incorporated components of autobiography and activism. Silva also spotlighted the most recent issue of O Menelick 2º Ato, a quarterly magazine that recognizes the cultural contributions of the Black Atlantic, for which she is co-editor.

For more information about the Duke Brazil Initiative, click here.