Llanchama (or Yanchama) is a natural textile used by multiple indigenous communities of the Amazon. Because of its origin, it does not need to be waived, it is considered a “Gift” from mother nature, and also a way to teach how to make textiles in situated contexts. It is widely used in the production of material culture. It comes directly from the great sapucaia inner bark (Lecythis Pisonis), that peels naturally due to its rapid growth in the forest. Llanchama is used as material for ritual garments, blankets, diapers (for babies), baskets, sifters, nets, etc.

For example, this Tikuna garment is used for the macaco dance, which is a ritual performed when the chontaduro (pupunha fruit) from the Chonta palm is in full harvest. The fruit is a staple of the Amazonian people. People dance and recite myths, wearing costumes made of llanchama. Men dance in one direction and women in the other; it is a strenuous and exhilarating ritual dance. During the party, the macaco (a monkey) character runs around people, bothering and scaring them. Other rituals such as the Moça Nova (a rite of passage) also used llanchama in the production of the dresses.

The most extensive collection of llanchama art in the United States is located at the University of Illinois,  Krannert Art Museum. It was assembled in the 1970s by anthropologist Charles Bolian and comes from the triangle area of Brazil, Perú, and Colombia. The collection of 225 objects, 190 paintings, 25 masks, 5 baskets, and 5 objects was first shown to the public as art in the early 1990s.[1] Other indigenous peoples of the Amazon that also use the bark in their material culture are the Andoque, Borta, Uitoto, Yakuna, and Timukas.

Peruvian American artist Renzo Ortega got the llanchama for this series from a well know Amazonian artist (painter) Brus Rubio Churay (Bora-Uitoto) as a “Gift,” back in 2016. Rubio Churay was in Washington DC as part of the Smithsonian Folklife Festival where Ortega was his interpreter and liaison. Rubio Churay’s work has gained international recognition for the profound description of tribal life in contemporary times, in both the daily management of the jungle environment and the collective tribal experience that presents itself in the form of dreams, visions, and legends. Having been brought up the traditional way by his Bora/Uitoto family, Rubio’s ancestral knowledge is intimate yet critical. In addition, Rubio has interacted with anthropologists and his paintings often focus on current social and environmental issues. Rubio is a reference because he stands out among the self-taught artists of the Amazon. His peculiar style adapts expressive figuration, subtle form and color, and an elaborate interrelation between the symbolic and compositional elements of painting.

Can we consider this series patrimony? A form of cultural heritage from which to build? This is the question Ortega brings up when reflecting on the material and the representation of these pieces. His work functions as a critical reminder of mestizaje and miscegenation in art and culture, then a better term applied to this approach would be that of regeneration. This is a powerful idea since it alludes to healing and restoration – a return to wholeness after a decline due to fragmentation and unbalances. Regeneration shares a common core with therapy and healing, via art.  When you imagine regeneration as a verb, the mental motion picture that plays gives a sense of re-ordering, restructuring, and integrating components into a new cohesion. In this sense, PATRIMONIO is an opportunity for innovation and a welcomed disruption – of the status quo (in art and culture) that has led us woefully, gruesomely far down the road of degradation.

Ortega argues about this series of drawing Interventions on llanchama:

“The Patrimony series responds to the global evil of heritage destruction, the physical destruction of objects from the past, and the conceptual destruction of people's thoughts and cultural contributions in the present. These drawings are an act of shaping and destroying. A sudden change is generated not by the weather or the erosion; humanity is the one who killed history. Beyond the formal elements of drawing, the physical process of these works creates an imprint that resists and adapts to intentional manipulation. With these works, I create resistant traces, physically and thoughtfully, to follow through on the projected path.”

Patrimonio| Heritage is organized in conecction to Art of Peru - Nasher Museum of Art at Duke University. 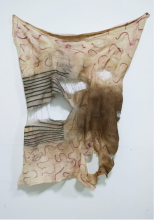 2021 Art Will Save Us Again, LUMP Gallery. Raleigh, North Carolina.

2019 What I Left and What I Brought, Power Plant Gallery at Duke University. Durham, North Carolina.

If these walls could talk, mural art exhibition, ABC no Rio, Local Project

The place in place of the place, Spanic Attack Art Collective, South Bronx

2017 SpreadArt Detroit. Artist in residency subsidized in part by the Sustainable Arts Foundation 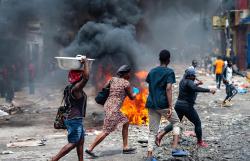