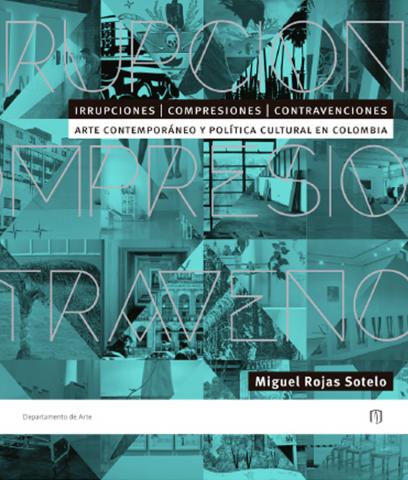 Miguel Rojas-Sotelo once served as visual arts director in Colombia’s Ministry of Culture (1997-2001), and after more than 10 years in the United States, the director of the NC Latin American Film Festival has written a book reflecting on the changes brought about by the Constitution of 1991 to the culture of his native country.

Rojas-Sotelo recently presented his book at FILBO, the International Book Fair in Bogotá (April 29), as well as at the Museum of Modern Art, University of the Andes, and Pontifical Xaverian University.

In 1997 the Ministry of Culture developed policies to decentralize and recognize cultural diversity. Simultaneously, and in line with the new economic framework of Colombia, neoliberalism, those policies promoted the cultural production through markets, and the professionalization of cultural actors, public and private institutions. It was a good moment of democratization and redistribution of resources for the cultural sector. However, the country abandoned its centralist nationalized economy in favor of a decentralized system and a market-based economy, throwing away everything that was not market driven. A new wave of natural and cultural extraction emerged, displacing populations and reshaping cultural production, Rojas-Sotelo said.

Long preoccupied by the war between the government, organized crime, paramilitary militias, and the FARC guerrillas, Colombian culture has been given over to the influence of Narcoaesthetics, “gangster culture,” replacing traditional folk music and socially engaged arts for shallower versions, good for mass consumption.

The result is a country in which the distinctions between high and low culture collapsed. Everything is for sale, and cultural products have been domesticated, he said. 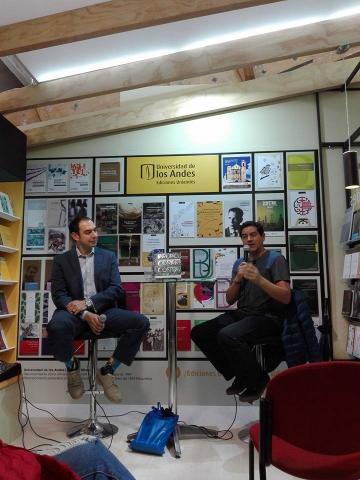 Miguel talks about his book at the International Book Festival.

Artists are producing from the unfinished project that is the modern nation. That is why the Colombian intellectual middle class has been obsessed with revisiting the foundational moments of the nation, such as early natural and scientific expeditions, with a Eurocentric worldview.

“The idea of a culture that expresses diversity and the history of a nation was diminished as global popular culture became part of the mainstream, and local and indigenous cultures have been re-marginalized,” Rojas-Sotelo said.

Irruption, Compression, Contravention explores the production of the few visual artists those modernizing projects left behind. In his critique, he focuses on four artists who are portraying this transformation from multiple perspectives.

Maria Elvira Escallón (born 1954) is an artist who documents the failure of Colombian modernity, using in-situ installations and photography to explore how train stations, theaters, hospitals and other public buildings abandoned by the state are left to tell their incomplete stories.

Libia Posada (born 1961) is a doctor and visual artist who uses her art to examine the abuse of women in the context of urban violence and forced displacement, often using the body as a canvas.

Mogaje Guihu (Don Abel Rodriguez, born 1941) is an indigenous Nonuya elder from the Amazon who was forced to leave the forest due to the armed conflict and now draws the rainforest from memory. Considered outside of the professional art world, he has captured the imagination as a sort of new-expeditionary in reverse. He has shown his drawings and basket-weaving skills nationally and internationally since 2012. (See A Self-Taught Artist Paints the Rain Forest By Memory – NPR) 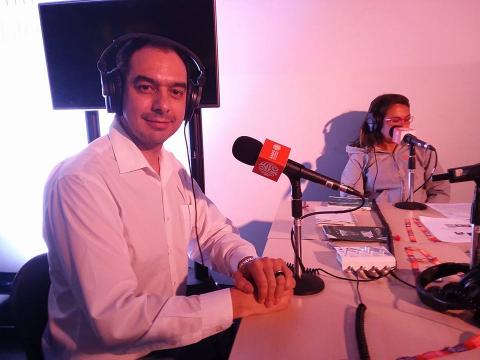 Juan Obando (1980) is an artist who uses video, performance art, design, and technology to critique contemporary culture in Colombia and in the United States. His installation Tropikopf (2009) used graphic mutations combining the tropical iconography used by the Colombian country brand "Colombia Is Passion" and Nazi symbols like the Parteiadler and the Totenkopf.

Miguel Rojas-Sotelo is an historian, visual artist, scholar, and curator. He is the Director of the North Carolina Latin American Film Festival, and an instructor at Duke University, where he is also the Special Events Coordinator at the Duke Center for Latin American and Caribbean Studies. The book is written in Spanish and sold by Ediciones Uniandes.