The North Carolina Latin American Film Festival (NCLAFF) screened 34 films for its 34th year as one of only a few festivals that focus on films from Latin America and the Caribbean.

The 2019 NCLAFF, organized by the Consortium in Latin American and Caribbean Studies at the University of North Carolina-Chapel Hill and Duke University, ran from October 20 to November 2 at venues in Durham, Chapel Hill, and Raleigh.

NCLAFF welcomed José A. (Pepe) Vargas, the director of the Chicago Latino Film Festival (CLFF), the largest and most comprehensive festival of Latin American films in the United States. 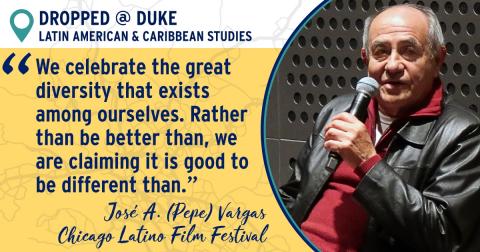 At the event “Three Decades of Latin American Film Festivals in the U.S.A,” Pepe Vargas said he began CLFF in 1985 because at the time Latin American filmmakers found it very hard to get their films into international film festivals. They didn’t think there was an audience for these films in the U.S., but Vargas has proved them wrong for 35 years.

Sharon Mújica, founder of NCLAFF, had a similar story. She had seen wonderful films during her time living in México, and found in film a great way to share and complement what faculty and researchers were doing in mid-1980s Latin American studies at UNC and Duke.

This year the festival included films from 13 countries, brought 12 guest filmmakers and scholars to hold screenings, workshops, class visits, and a special exhibition at the John Hope Franklin Center, “Encantada|Enchanted.”

It hosted a Peru night, coinciding with a discussion of the most recent book on the Shining Path movement in Peru by Duke professor Orin Starn and UNC-CH professor Miguel La Serna. The festival also launched the book Documentary Filmmaking in Contemporary Brazil by Duke assistant professor Gustavo Furtado on Brazil night.

Hurricane Maria and the devastation to the Puerto Rico’s power grid were the topic of Puerto Rico night. Ambassador Patrick Duddy spoke at Venezuela night at Durham Tech Community College before a film about the rise of Hugo Chavez, and the fall of Venezuela’s economy under Nicolás Maduro.

NCLAFF also celebrated the International Year of Indigenous Languages – declared by the United Nations – by showing a series of short films in those languages or made by indigenous filmmakers. The Maxakali language of Brazil, and the Jiw and Nukak-Maku languages of Colombia were represented with animated shorts, and the internationally acclaimed film Pájaros de Verano (Birds of Passage) featured an Indigenous tribe speaking Wayúu naiki.

For the first time, NCLAFF collaborated with the North Carolina Museum of Art, bringing Dos Fridas (Two Fridas) to coincide with the museum’s “Frida Kahlo-Diego Rivera and Mexican Modernism” exhibit.

NCLAFF director Miguel Rojas-Sotelo said he was proud that more than 1500 people were able to enjoy the diverse content of the festival in a number of events that took place not only in auditoriums and film theaters, but also in class rooms, galleries, academic and not so academic spaces in this region of North Carolina.

We look forward to the 35th edition of NCLAFF!

NCLAFF was presented by the Consortium in Latin American and Caribbean Studies at the University of North Carolina at Chapel Hill and Duke University, with the generous support of the U.S. Department of Education and the Andrew W. Mellon Foundation. Co-sponsors include:  Center for Latin American and Caribbean Studies at Duke, Institute for the Study of the Americas at UNC-CH, Department of Romance Studies at UNC-CH, PRAGDA, Duke Arts of the Moving Image and Screen/Society, Duke Brazil Initiative, Duke MFA-EDA program, Duke AAHVS Speaker Series, FHI Social Practice Lab at Duke, Forum for Scholars and Publics at Duke, The Program in Latino/a Studies in the Global South at Duke, the Carolina Theatre in Durham, Chelsea Theatre in Chapel Hill, and the North Carolina Museum of Art in Raleigh.

Special thanks to the Chicago Latino Film Festival.