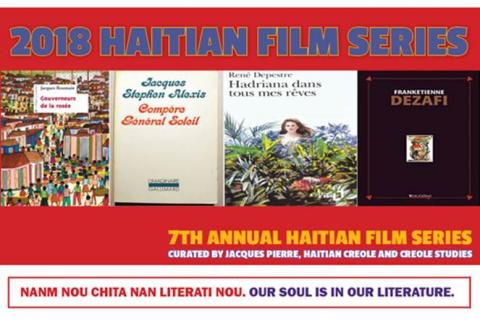 This very informative and revealing documentary explores the Haitian society of the late 19th century and early 20th centuries by focusing on the tormented life of one of Haiti’s most important author, Jacques Roumain, who was also a prominent political figure. In his writings, Roumain raised vivid questions that were and still are very much relevant in regards to some of the issues the country faces to this day.

Jacques Stephen Alexis is certainly one of the most prominent writers of Haiti and the Caribbean. Coming  back to Haiti in 1961 after a long journey abroad, the author of "General Sun, My Brother" and "In the Blink of an Eyelid" is kidnapped on François Duvalier's orders and has been missing since then as well as 4 of his companions. This film shows the efforts to find records and decipher the mystery of his disappearance. At the same time, it makes us discover the revolutionary, the thinker, the man of science, the loving father and the great writer.

A poet as feisty in his beliefs as in his dissents, René Depestre was close to the most prominent political and literary personalities of this century. This film shows him in the company of his Haitian countrymen as well as with Pablo Neruda, Jorge Amado, Aimé Césaire, Léopold Sedar Senghor, Edouard Glissant and Ho Chi Minh, Mao Zedong, Fidel Castro, Che Guevara, as he tells us about his political and literary struggles, celebrates love, sex, the female body and his erotic safaris. We discover a 90-year-old rebel searching for eternity, at the top of his poetic art, with the brilliance of a great writer who dreams of living in "the great house of the humanities.”

This film is a journey through the worlds of Frankétienne, the biggest Guédé creator of this country. He takes us through the intricacies of his poetic, literary and plastic creation as a singer, an actor of curses, a poet, a Nobel prize hopeful, and the director of his own death.