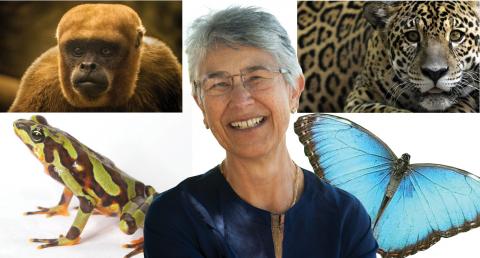 Yolanda Kakabadse, president of the World Wildlife Fund International (2010-2017) will speak at Duke University on Thursday, Oct. 18, about the individual’s role in addressing global climate change and threats to wildlife.

Her lecture, “Our Planet in Permanent Change: Do I Have a Role to Play?” is the inaugural lecture of the Innovation and Leadership in Latin America Series launched by Duke’s Center for Latin American and Caribbean Studies. She will speak at 5 p.m. on Thursday, Oct. 18 in Love Auditorium in the Levine Science Research Center on Duke’s West Campus.

Kakabadse is recognized as one of the world’s most prominent environmental leaders, and a global champion of sustainable development and biodiversity preservation. From 2010-2017, she served as President of WWF International, one of the world’s largest independent conservation organizations with more than 5 million supporters worldwide, and a presence in over 100 countries. Prior to that, Kakabadse was the Executive Director of Fundación Natura and served as Minister of Environment for the Republic of Ecuador from 1998-2000.

“Yolanda Kakabadse is a vitally important voice on the environmental challenges facing the world, and we are excited to have her launch our series highlighting the work of innovative leaders in Latin America,” said Ambassador Patrick Duddy, director of the Center for Latin American and Caribbean Studies.

Since the late 1970s, she has been dedicated to protecting the natural environment. In 1993, she created Fundacion Futuro Latino Americano, an organization dedicated to promoting the sustainable development of Latin America through conflict prevention and management. In 1990, she worked for the United Nations in Geneva, and has served as a board member of several international organizations, including the Ford Foundation, and the Holcim Foundation for Sustainable Construction. From 1996 to 2004, she was president of the International Union for Conservation of Nature (IUCN).

The talk is free and open to the public. This event is co-sponsored by the Office of Global Affairs at Duke, with additional support from the Hanscom Endowment, and the Nicholas School of the Environment.