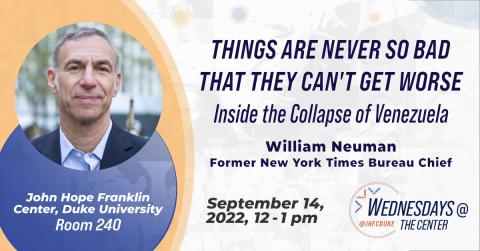 “Things are never so bad that they can’t get worse,” is the kind of humorous fatalism William Neuman encountered in Venezuela while he was a New York Times bureau chief for the Andes region from 2012 to 2016.

Neuman will talk about his experiences in Caracas at the Wednesdays at the Center event at noon on Wednesday, Sept. 14 in the Ahmadieh Family Conference Hall (Room 240) in the John Hope Franklin Center.

His recent book, “Things are Never So Bad That They Can’t Get Worse: Inside the Collapse of Venezuela,” is a fluid combination of journalism, memoir, and history that chronicles Venezuela’s tragic journey from petro-riches to poverty. He recounts a highly personal portrait of the crisis unfolding in real time, with all of its tropical surrealism, extremes of wealth and suffering, and gripping drama. It is also a heartfelt reflection of the country’s great beauty and vibrancy—and the energy, passion, and humor of its people, even under the most challenging circumstances.

Former U.S. Ambassador to Venezuela Patrick Duddy said he is looking forward to the conversation with Neuman on the current state of Venezuela, the refugee crisis, and what the country’s relationship with China and Russia might mean for the United States. 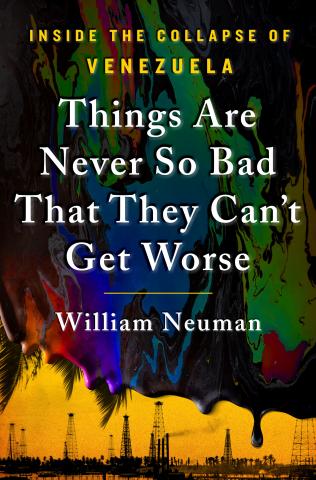 The talk is part of the Duke Center for Latin American and Caribbean Studies Latin America and the United States in the 21st Century Seminar Series. Wednesdays at the Center is a topical weekly series sponsored by the John Hope Franklin Center.