Former president of the Inter-American Development Bank, Luis Alberto Moreno, described the many issues facing Latin America and the Caribbean in the wake of the pandemic as pre-existing conditions that call for visionary leadership from governments, the private sector, and society as a whole in order to heal the region.

In his presentation, “Latin America’s Lost Decades: The Toll of Inequality in the Age of COVID-19,” Moreno described the huge disruption caused by the SARS-COV-2 virus in a region already suffering from inequality, unemployment, and low GDP growth.

Moreno said that he was encouraged, however, at the rapid pace of innovation and digitalization happening in the last eight months. 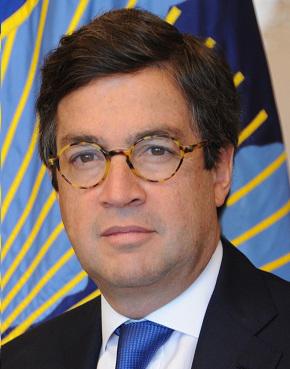 Luis Alberto Moreno was president of the Inter-American
Development Bank from 2005-2020.

The pre-existing condition Moreno began with was low growth.

In the past five years, Latin America has seen the lowest growth it has had in decades, which has led to the rise in inequality, social unrest, and a lack of trust in institutions.

“Something that we see even further today is the anger that is out there,” Moreno said. “And this is no longer just Latin America, but you see it here in the United States, and you see it around the world.”

If we cannot bring back trust in our institutions, he said, the opportunity for populist movements on the right and left will break any capacity to unify to solve the serious problems the region faces.

About 40 million jobs were lost in Latin America over the past year, he said, and 11 countries have seen their sovereign ratings downgraded. He expects it will take per capita incomes three to four years to recover.

Moreno’s outlook was not completely gloomy, however.

“When I think back on what this year has taught us, I see two amazing forces,” he said.

“On the one hand, you see huge disruption that has touched not only all of our lives, but especially it has hit a number of industries, the whole recreation industry, the airlines, the restaurants, the bars, the hotels, the travel business as a whole. On the other hand, we had a huge acceleration of innovation, I dare to say perhaps like we have never seen in many decades.”

Moreno said certain Latin American countries have seen three to five-year’s worth of digitalization in just eight months, and where 50 percent of the population have largely been unbanked, more than 40 million Latin Americans opened bank accounts for the first time in 2020.

He believes that increased access to technology will bring down the cost of health care and education.

“It’s going to change the need of how we invest in health care and how we can not only develop a much higher quality health care, but equally better for everybody, at a lower cost,” Moreno said. “Education equality is going to change, and in my view, it has to change.”

In the long term, however, Moreno said the critical challenges of pandemics, climate change and the disruptions they cause cannot be solved without a strong commitment to multilateralism.

“And what we have seen is the opposite,” he said. “Never before have we so needed to collaborate, as you say here in the States, ‘all hands on deck.’”

It is time for a whole government approach, with roles for both civil society and business.

“The worst thing one government can do is not to provide the kind of fiscal stimulus to try to keep jobs, to support the poorest, to support women, to support state and local governments,” Moreno said. “It will continue to be necessary until we begin to see the kind of steady growth that takes us out of the pandemic, but in the process, we’re going to have to pay that bill sooner rather than later, and that’s a big question mark.”

Moreno said he applauded the commitments global corporations made at the Davos 2021 summit for a “great reset” in the wake of the pandemic.

“Never before have I seen the biggest global companies in the world committing to a really profound transformation around stakeholder capitalism, and thinking of the different areas in which they can contribute” to environmental, social, and governmental safeguards, he said.

Moreno encouraged Duke students from the region to be innovative and entrepreneurial when it comes to unlocking the potential of Latin Americans to solve these problems in their own countries.

“It is a combination of having an entrepreneurial spirit and shooting for the stars, which every young person does,” he said. “We have to have this confidence that we can transform things, and who better than young people lead this effort?”