The flight of Central Americans to the U.S. and Mexico was a foreseeable outcome of deportation, says journalist Óscar Martínez

Salvadoran journalist Óscar Martínez, an award-winning chronicler of the plight of Central Americans, visited Duke University on Tuesday and explained how the current migration crisis was predictable and had roots in decades of U.S. policy.

Martínez, who has won international acclaim for his books and articles on the desperate, dangerous journey migrants face in their flight toward the United States, was invited by the Center for Latin American and Caribbean Studies to talk about his investigations into migration and the violence causing migrants to leave El Salvador, Guatemala, and Honduras—the countries of the so-called “Northern Triangle.” 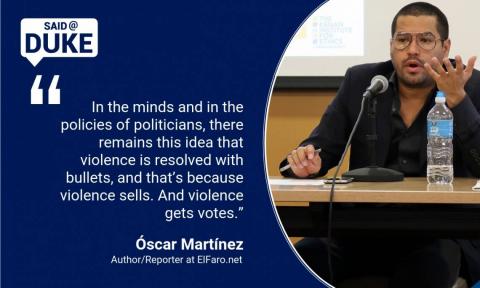 Just as the civil war in El Salvador was ending in the early 1990s, the U.S. began deporting the migrants who had fled the violence back to the region. Many who had come to the U.S. as children had joined gangs as a means of identity and safety, and now they were back in a country with no family ties and a weak government. They brought their gang wars with them.

“One terrible lesson we learned is that the end of a war is not necessarily the beginning of peace,” Martínez said.

The result was a country with the highest homicide rate in the world in 2015.

The gangs have complete control over the neighborhoods, and the police, low-paid and in a dangerous job, are corrupt, he said.

“When that happens to you, and you are a working-class Salvadoran, the country is ended for you. Where are you going to go? If you go to another neighborhood, maybe nothing is going to happen to you, maybe something, but the feeling that you can die every night is going to be a presence every night in your life, and it’s not right.”

For his most recent book, The Hollywood Kid: The Violent Life and Violent Death of an MS-13 Hitman (2018, Penguin/Random House), Martínez and his brother Juan Martínez, an anthropologist, conducted dozens of hours of interviews with the notorious Hollywood Kid, who successfully completed more than fifty killing missions for the MS-13 before becoming an informant against them because one of their members had killed his brother.

The book explains that the Central Americans who left during and after the 1980-1992 civil war came to places like Los Angeles and first formed gangs as identity groups who could protect them and give them a place in this country.

“When Salvadorans came to the U.S. after the war, this country only asked one thing, ‘Do you know how to fight?’” he said.

Martínez criticized the approach to fighting gang violence with more policing and more deportations. He said the elite in El Salvador never see guns or gang members, but the government uses the fear of violence for political gain.

“In the minds and in the policies of politicians, there remains this idea that violence is resolved with bullets, and that’s because violence sells. And violence gets votes,” Martínez said. “Think of how many people voted for Donald Trump because of deportation. But … when you started to deport MS-13 members, the problem was like this [low] but now it’s like this [high]. For you.”

He asked U.S. citizens and politicians to think in practical terms, not moral ones.

As a journalist for ElFaro.net who spent a year riding los trenes de la muerte (death trains), Martínez was critical of much of the reporting about migration and the caravans.

“There are a lot of journalists who pretend to cover migration from the press conferences of the authorities, of the government, and I’ve never seen a migrant crossing there. Never.”

They often cover the issues of the poor from the perspective of the rich, he said. When that happens, people who have never met migrants invent conspiracies that the caravans are created by Donald Trump, George Soros or those with sinister motives.

The migrants had simply found a practical way to avoid the horrors they experienced riding the trains.

“Migrants understood that to migrate in mass can be safer. There wasn’t rape, there weren’t kidnappings, there wasn’t murder or disappearances. They cross proud,” he said.

Martínez was pessimistic about the migrants’ chances at the border, however. The refugee system isn’t working for them, and the reasons for claiming asylum would have to change to include flight from gang violence and instability.

He was optimistic, however, that he and journalists like him who embed with their sources and tell the truth about mass killings and other injustices would eventually see a change.

Óscar Martínez’s visit was sponsored by the Duke University Center for Latin American and Caribbean Studies, Duke Libraries, the Forum for Scholars and Publics, the Kenan Institute for Ethics, the Institute for the Study of the Americas at the University of North Carolina at Chapel Hill, and the UNC-Duke Consortium in Latin American and Caribbean Studies.

His articles and investigations can be found at the project Sala Negra (Black Room).