World-renowned medical anthropologist Dr. Paul Farmer believes some of the starkest global health inequities can be remedied when tackled by top-notch researchers and innovators in partnership with local communities.

Dr. Farmer, Duke alum (Trinity ’82) and parent, has confronted epidemics from Ebola, AIDS, and tuberculosis to COVID-19 in some of the world’s poorest places. Partners In Health, the global health organization he co-founded, is actively involved in 11 countries across four continents, including Haiti, Peru and Mexico. 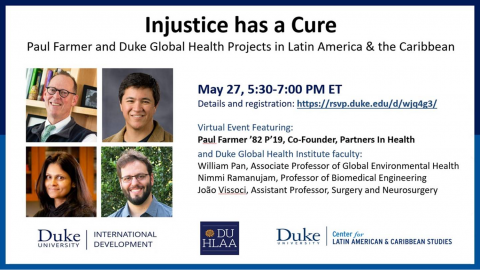 In “Injustice has a Cure: Conversations with Leaders in Latin America & the Caribbean,” Farmer invited three Duke researchers, William Pan, Nimmi Ramanujam, and João Ricardo Vissoci to discuss their work in Latin America and the real-world solutions they hope will measurably improve the most challenging global health problems, as well as the partnerships that made those solutions possible.

William Pan, Associate Professor of Global Environmental Health, has been working in the Amazon basin for more than 20 years. He began his work developing an early warning system for malaria outbreaks, but seeing the environmental and human impact of artisanal gold mining on the region changed his trajectory.

“Everybody has gold,” Pan said, whether worn on the body or in our electronics. 4500 tons of gold is consumed annually, and 20-30 percent of it comes from Artisanal and Small-Scale Gold Mining (ASGM). A huge portion of that is illegally produced in Peru, Bolivia, Ecuador, Colombia, and Venezuela.

When we buy gold, “we contribute unknowingly to massive environmental damage, human trafficking, the emergence of novel diseases, and terrorism,” Pan said.

It’s also the most toxic activity humans have on the planet, according to Pan, and his work has focused on measuring the amount of methyl-mercury these mines produce and release into the water and the air and the blood of the surrounding communities.

Mercury is a highly potent neurotoxin that contributes to cognitive decline, especially in children, and the effects are irreversible.

Pan partnered with the Ministry of Health in Peru as well as local partners to study the amount of mercury exposure in the Madre de Dios region and create predictive risk maps and a database of the toxicity levels in water, soil, plants, animals and humans. His team found 41 percent of the people studied had mercury levels exceeding the World Health Organization safe tolerance levels.

These findings came with no easy solutions.

“Gold is arguably the most precious metal in human history. We won’t stop the demand for it,” he said.

So Pan’s research team partnered with other researchers at Mercer University, the University of Toronto, the Centro de Innovación Cientifica Amazónica, and others, and won the Gold Award at the 2020 Artisanal Mining Grand Challenge for their Mercury Capture Systems for ASGM Gold Shops. Their capture system was able to capture more than 90% of the mercury in the gold extraction process. It is currently being tested in Guyana with hopes to expand it to Colombia soon.

Nimmi Ramanujam, the Robert W. Carr Professor of Engineering and Professor of Pharmacology and Global Health at Duke, has developed technologies to have the most wide-reaching impact on women’s health.  She founded the Center for Global Women’s Health Technologies in 2013.

Cervical cancer is the number one cause of death by cancer among women of reproductive age in Peru and in her work with Dr. Patty García and Project Hope in Peru, Ramanujam was able to identify the barriers that the poorest women face whether in Peru or other Latin American countries: lack of preventative care, poor quality of care, and fear of the cervical exam.

If those barriers could be surpassed, Ramanujam and her team believed that a 70 percent increase in screening and diagnosis would lead to a 35 percent reduction in death in 10 years.

So the team of researchers developed a Pocket Colposcope, similar to a spy pen, to insert during a medical exam, producing a high quality image of the cervix without the need to travel long distances to a clinic or large, expensive machinery.

Another invention, the Calloscope, was inspired by the shape of the calla lily, and replaces the speculum with an easier, less painful exam that can be easy for women to use. It has been tested in Peru, Ghana, and the United States, and all women reported they preferred it to the speculum.

Ramanujam said she believed this technology is poised to transform the traditional models of women’s health care.

“Success is about partners and partnerships,” Ramanujam said. “We learn from women what is needed to make them, not hospitals, the center or our solutions.”

João Ricardo Vissoci, Assistant Professor in Surgery and Neurosurgery at the School of Medicine, is a researcher of population health, health systems and quality of care and is especially interested in how innovation and big data can be applied in accessing quality of care in global mental health.

Using mapping and artificial intelligence tools, Vissoci’s team were able to take health care data in Brazil and determine every hospitalization for acute events where there was an increased risk of morbidity, such as cardiac arrests, strokes, and snakebites. Then they showed how far a patient would have to travel to receive the care and resources for their conditions.

“Would it be possible to help policymakers to know where to put resources, what resources go where, how to optimize the allocation of scarce resources, and how to put them closer to patients who need it?” he said.

The COVID-19 crisis in the state of Manaus showed why such information could have prevented the shortage of oxygen tanks and the days and days it took for new oxygen tanks to arrive, and the lives that could have been saved.

Using GIS technology and collaboration from Vissoci’s partners at the Federal University of Maranhão, they created tools to identify at-risk patients far from a medical facility so the Brazilian health system could allocate resources to provide better preventative care for those patients.

Farmer said these projects, among many others, show the real value of interdisciplinary research and the value of partnerships, governmental, academic, and philanthropic.

Pan said that universities are not always recognized for the role they play in advancing societal goals.

“When we go into the Amazon, we work in areas where government is not found. Communities and individual families are really happy to see us,” Pan said. “Government agencies and NGOs don’t always go to and don’t have the space to do research, but we partner with them because they are our end users to strongly deploy the inventions we create.”