Colombia to strive for progress and prosperity in next 10 years, says Ambassador

His presentation, "Why Colombia?" underscored his optimism for the future of the country, and emphasized its investment opportunities for industry, agriculture, and technology. His visit was sponsored by the Duke University Center for Latin American and Caribbean Studies. 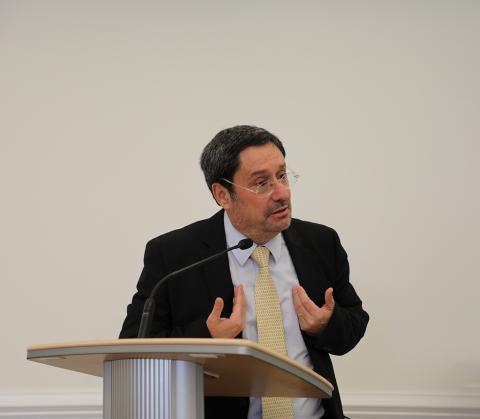 “Colombia has changed in the last 20 years,” Ambassador Santos said, recalling a time before the peace process when 40 percent of mayors could not live in their cities. Though there are still challenges like increased coca cultivation and the influx of Venezuelan refugees, Colombia has become a trendy country to invest in, he said.

Santos said he saw the trade conflict between the United States and China as an opportunity for Colombia to increase foreign investment in industry, and to become part of the global value chains.

“Colombia is the belly button of the Americas,” with its geographical location equidistant between Argentina and Chile in the South and Florida, New York, and California in the north, Santos said, which makes it well-placed to become a new industrial and manufacturing base in the next 10 years.

Santos also emphasized Colombia’s agricultural potential in Latin America and said that in the future, the country could become a leading producer of corn, soy, blueberries, and other products.

Santos noted, Colombia is also working with tech companies in the United States to promote tech startups and venture capital in a country with a lot to offer foreign business investors. “Biodiversity, creativity, resilience,” Santos said. “Resilience is a classic quality of Colombians.”

While Colombia has absorbed around 1.5 refugees from Venezuela, Santos was optimistic that the crisis is stabilizing. Santos said Colombia needs more help from the U.S. to cope with the refugee problem as well as more engagement from Europe. He commented he fears that it may take Venezuela decades to fully recover.

Colombia is making progress on its other issues, such as eradicating coca, confronting the illegal gold mining on the Atrata river, and protecting social leaders in these areas from assassination, he said. 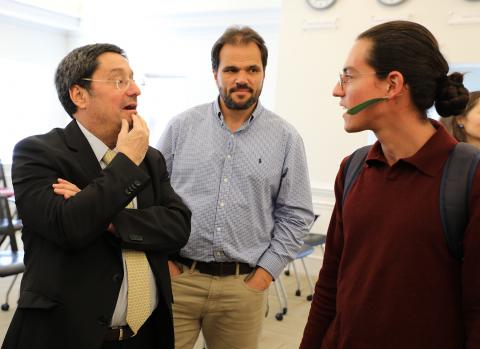 Santos hopes that once the illegal traffickers on both sides of the Colombia-Venezuela border are defeated that the two countries will become a powerhouse of prosperity in the region, built from the bottom up.

In addition to his public presentation at the Franklin Center, Ambassador Santos also met with students and local business leaders during his Durham visit.