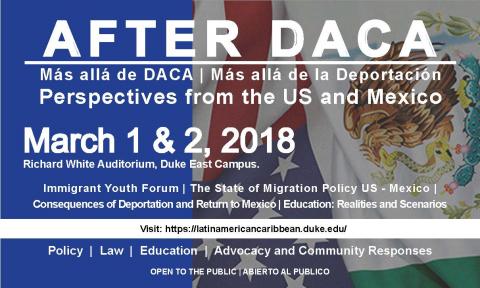 What does the future hold for immigrants who have lived in North Carolina for years and whose families include some members with DACA status or U.S. citizenship? Will the Deferred Action for Childhood Arrivals (DACA) program, which has protected many from deportation since its creation in 2012, be succeeded by permanent legislation laying out a new U.S. policy for immigrants who grew up here? And what about those who have been deported or forced to return to the country of their parents’ origin? To what extent do the realities they live with in Mexico contribute to current debates over the future of DACA and immigrant families in the U.S.? And finally, what does this dramatic conjuncture signal in terms of the past, present, and future of migration-related political, economic, and social issues in the United States, Mexico, and the Americas?

These and related questions will be addressed March 1 and 2 at the Duke University symposium After DACA/Más Allá de DACA: Perspectives from the U.S. and Mexico, organized as part of the Duke Center for Latin American and Caribbean Studies Burning Issues in Latin America Series and co-hosted by the Duke Spanish Language Program.

The symposium has been scheduled to coincide with the beginning of the Trump administration’s scheduled phase-out of the DACA program, recently extended by federal court injunctions. The event will explore humanitarian, legal, and policy issues primarily within the context of U.S.-Mexican relations and will feature not only a binational team of experts but also students and young people from both countries.

Jill Anderson, Mellon Visiting Professor at CLACS, refers to this generation of immigrants as “bicultural, bilingual, but not yet binational,” while others like Patricia Gandara at UCLA have named them “the students we share.”

Students from the organization Duke Define American will begin at 6 p.m. Thursday, March 1 with a dialogue between students and immigrants themselves, along with co-organizers Otros Dreams in Acción (ODA), an organization created by and for people who grew up in the U.S. but who find themselves in Mexico due to deportation or the threat of deportation. The symposium continues 9 a.m.-5 p.m. Friday, March 2 with speakers from Duke, the Migration Policy Institute, Americans for Immigrant Justice, Mexicans in Exile, Veracruz University, the New School, Durham Public Schools, and ODA.

All conference events will take place at Richard White Auditorium, 1308 Campus Drive on Duke’s East Campus. All events are free and open to the public, and there will be Spanish/English interpretation at both events. 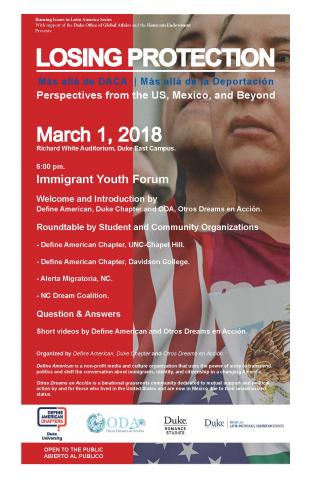 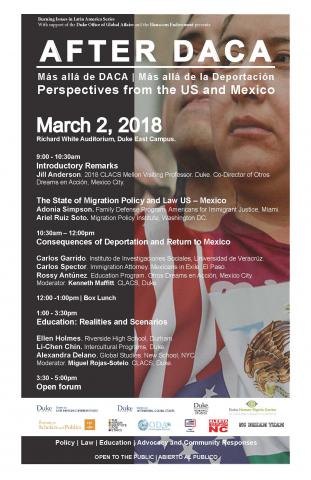